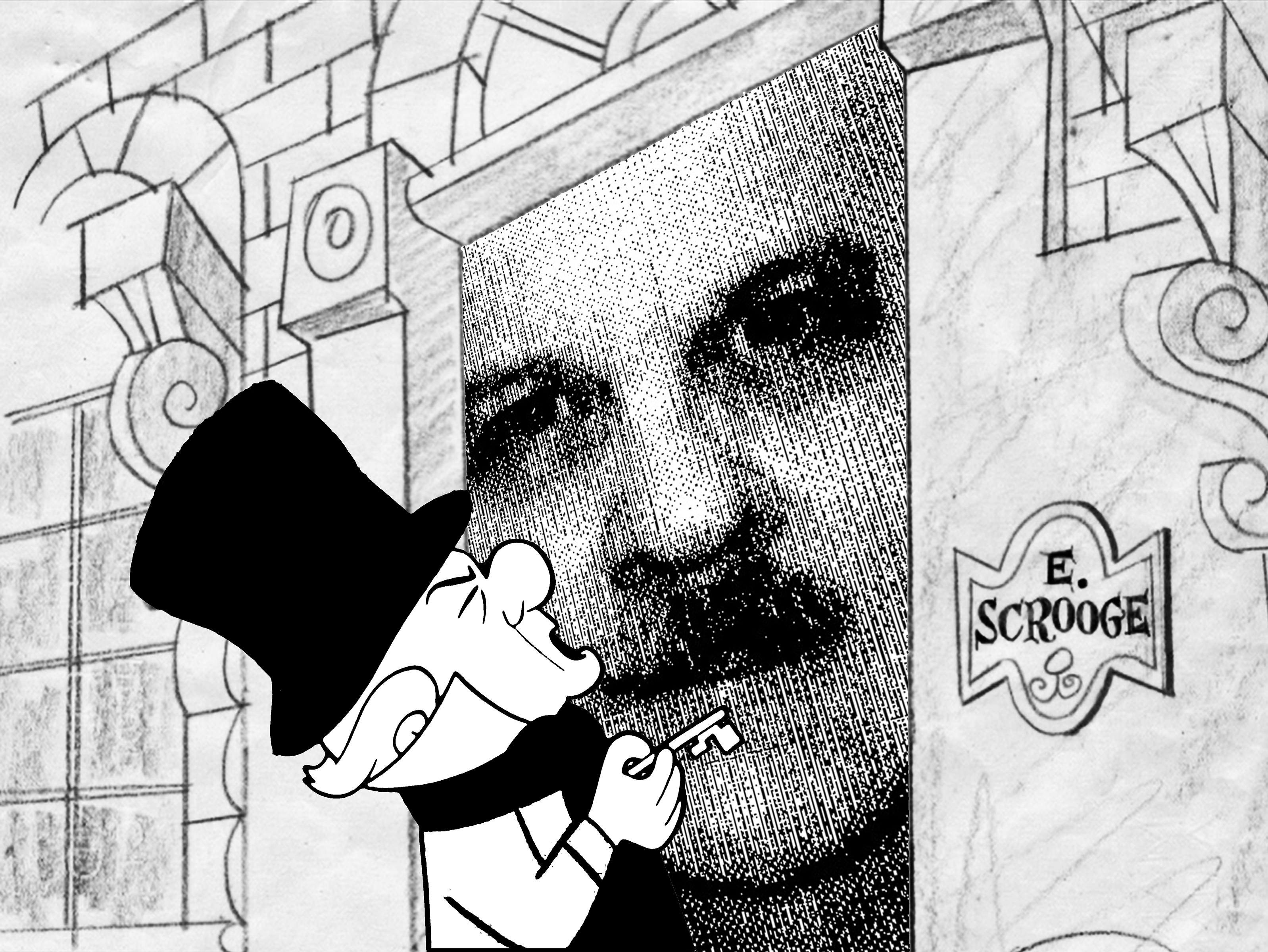 Yes, Charles is at it again, lighting the fuse of another explosive Yule log for 2018.  Apparently he thought that, this year particularly, the world could benefit from revisiting Charles Dickens' "A Christmas Carol." Dickens' story was likely the very first bit of classic English literature to cross Goff's path.  Naturally this meeting took place on television, through the animated feature:  "Mister Magoo's Christmas Carol," which was broadcast all over America by NBC on December 18, 1962.  Goff was just beginning his fourth year of life on Planet Earth at that time.

A little background for those readers unfamiliar with this broadcast...  "Magoo's Christmas Carol" was the first-ever, prime-time, animated television Christmas special, beginning a trend that has continued to this day.  This ground-breaking broadcast successfully overcame many challenges, including the transformation of Magoo himself from a bumbling caricature into an animated professional actor.  Previous to this airing, Quincy Magoo had been known to the world as a silly cartoon character who had a lot of trouble with his vision, which got him into a lot of trouble, generally.  Magoo's Christmas Carol revealed that Magoo was, in fact, not just a silly cartoon character, but, instead, he was an animated thespian, who merely played the role of a silly cartoon character. Now the star of a serious animated drama, Magoo would be playing the role of Ebenezer Scrooge.  Quite a proposition to illustrate, but the TV broadcast carried it off exquisitely.  Of course, fans of classic television know that Magoo's animated personage was really voiced by the genuinely human and talented actor: Jim Backus.

Magoo's Christmas Carol is also a musical.  The producers at United Productions Of America  considered a number of talented individuals to write the music for their program, eventually hiring Jule Styne and Bob Merrill.  These two guys were genuine prime-time picks, each having penned a heap of popular songs and Broadway show tunes.  The stuff they wrote for Magoo's Christmas Carol has been stuck in Goff's brain now for fifty-six years.

And getting back to Goff, as you might expect, he has taken his usual liberties interpreting the songs presented here.  If a listener is expecting to hear typical cover versions of the material from the original television broadcast, he or she is in for a big surprise.  The notes below might be good reading for listeners who want to know some details about what they'll be hearing on this album.

1)  In the televised broadcast, the "actor" Magoo sings "It's Great To Be Back On Broadway," while zig-zagging through busy traffic on his way to the theater.  Eventually he ends up in front of the theater, but his near-sighted vision leads him next door into "Stanley's Restaurant," instead of into the stage door entrance.  He is not in the restaurant very long, however.  He is heard uttering things such as: "I am the star, unhand me!" while the sounds of a scuffle thunder behind a panning camera's view of the building's exterior.  After a few seconds of this, Magoo appears again, being escorted out the back door of the restaurant by two burly fellows in aprons and chef's hats.
The sheet music for this song indicates that a much longer spectacle was originally intended for this first scene of the television broadcast, however.  The lyrics imply that Magoo blundered into a number of unfortunate interactions with the cooks and waiting staff before he made his exit from the restaurant.  Goff's interpretation of "It's Great To Be Back" incorporates some of the many lyrics that never appeared in the televised broadcast.  Goff also edited bits of dialog from other Mister Magoo cartoons into his recording of the song to help bring it to life.
2)  Goff recorded the vocals for  "All Alone In The World" and "Winter Was Warm" with microphones carefully placed in his basement's bathtub enclosure.
3)  Goff recorded the vocals for "Ringle, Ringle" through a Korg R3 vocoder/synthesizer.  Additional vocals are properly credited to the President.
4)  The title of this album:  "Razzleberry Dressing," comes from lyrics to a song entitled "The Lord's Bright Blessing," which appeared in the televised broadcast, but which Goff did not attempt to interpret for this project.
All Instruments, Singing, Editing, And Production
by Charles Rice Goff III, 2018

This "Razzleberry Dressing" Album Is A Not-For-Profit Production, Not Intended For Sale
Absolutely No Rights Are Claimed By Goff, Nor By Taped Rugs Productions